You are here: Home / Europe / Two days in Toledo | Spain

Back in 2015, after returning from a three months solo trip around Europe, the plan was to keep on traveling more. So, I got a job at a restaurant where I had plans to stay for a few months, save some money and then head off to continue my quest to travel every country in europe.

Like always things didn’t end up going as planned and I only worked at the restaurant for the summer. Even though the money wasn’t enough for any big trips, I still decided I was taking some time off. I wanted to travel somewhere, even if it was close to home, and I would make it work somehow. In order to make my next trip cheap I knew I couldn’t rely on last minute flights, so I started researching my options and that’s how I remembered the country that had been my neighboor all along, Spain.

After traveling to seventeen countries, thirteen this same year, Spain sounded like the perfect way to end my travel year. I was able to find a night train from Lisbon to Madrid for only 30€ and all the buses and trains connecting the cities I wanted to visit were less than 20€ each and I could make it back home easily as well. I booked my train ticket to Madrid and then just decided on the rest of the itinerary over the next few days.

The night before leaving I remember I went to my parents house to get my backpack and pack my things. My mother wasn’t too happy about this and couldn’t understand what I was doing. I told her ‘I’m going to Spain tomorrow on a night train’. She may have lost her mind a bit here but to be fair telling her one day before was not a nice move from my side.

THE NIGHT TRAIN FROM LISBON TO MADRID

The day I leave home to go travel alone is always stressful. I’m always terrified and I start freaking out and think about all the things that can go wrong. On my way to the train station I kept thinking maybe I was doing this wrong this time. Yes I wanted to travel but was this the right time? Was this the right move? Should I have found another job instead? My mother was angry at me for making this decision without even telling her, I was sad because I was in a new relationship and I was about to leave my new boyfriend for two weeks. Everything felt weird, it didn’t feel right, and that terrified me more than going to travel alone.

At 21:30 the train showed up, I said goodbye to my boyfriend and I went inside the train. When I booked the ticket I had no idea what kind of seat I had booked. I thought I would have a regular seat and I would just find a way to sleep for the night in there but to my surprise for only 30€ I had booked a bed. Yes, an actual BED! The ‘room’ was pretty small, but it had two bunks with four beds total. The fact I was about to sleep on a bed on a moving train and I would wake up in Spain sounded like the coolest thing ever and suddenly I wasn’t so nervous anymore.

I was also lucky that I shared the appartment with another girl and a woman with her child, which meant everyone just wanted to sleep and the lights were off very early in the night so I honestly slept like a baby the entire ride.

Thirty minutes before arriving in Madrid the guy who had checked our tickets when we boarded was going through the entire train yelling ‘thirty minutes to Madrid’. This train ride comes with an alarm clock? Awesome! As the train arrived in Madrid I was well rested and even though the anxiety of being alone was still there, I was happy and ready for the adventure.

I got out of the train at Madrid-Chamartin. I didn’t realize the train would not leave me in the city center but no worries. I went to the machine and found out that by using the bar code from my previous ticket that the journey from Madrid Chamartin to Atocha was free. In a few minutes I arrived at the Atocha train station. Walking the platform was a weird feeling. I remember the bomb attack right a few years ago and it was right where I was standing at this moment. Made me feel lucky and blessed with the life I’m living.

I was almost at my destination. This had already been a huge travel day but I still needed to catch another train to get to Toledo, my first stop in Spain. When I tried to buy my ticket from Atocha to Toledo the next train was sold out. That’s ok, I told myself. I bought the ticket for a train a bit later and I used the time to get myself some yummi breakfast. It really didn’t feel that long until I had to find my platform and catch my last train of the day.

FROM MADRID TO TOLEDO

The train ride from Madrid to Toledo is really short, about thirty five minutes. The train is very comfortable and brand new and it’s a very enjoyable and easy journey to take.

When I arrived in Toledo I couldn’t believe I had made it. How cool is it to take a night train in a country and wake up in another one? Even with all the feelings of uncertainty, pretty sure due to pre solo travel anxiety and fear, I was finally in Toledo and I was feeling ready to explore this town I had read so much about.

Toledo’s train station is not exactly in the heart of the town. I had to decide between spending two euros and get a bus or just walk all the way to my hostel. I chose to walk – I know it sounds ridiculous but when traveling on a super tight budget, even two euros seem like a lot of money. I didn’t expect the walk to take me so long honestly. Maybe because I was exhausted after fifteen or sixteen hours to get here, but I was as slow as a turtle. Luckly I found some rolling stairs that took me all the way up, since the town is hop on the hill while the train station is at the bottom of that hill. Imagine if those rolling stairs weren’t there and I actually had to walk up that giant hill? If that was the case I think I would have turned back to get that bus instead.

In Toledo I stayed at Oasis Backpackers Hostel, a hostel right in the heart of the Toledo with a beautiful terrace on the roof where I spent a lot of time appreciating the views in total peace.

Toledo is a beautiful city and it was the perfect place to start my trip in Spain. Arriving with a bit of anxiety for traveling alone again, I was happy I chose to start in a small city that allowed me to not feel overwelmed. I felt really safe walking around in Toledo and I knew after two days exploring the city that I choosing to travel Spain was the right thing to do and I quickly feel in love with the country.

The day I left Toledo I was a bit sad I couldn’t stay longer in this city. I wanted to explore more but I realized I can never see everything since due to a low budget I can never stay in the places long enough to scratch all the items from the bucket list.

After two days in Toledo it was time to move on to my next destination, the spanish capital of Madrid. I woke up early, checked out of Oasis Backpackers and I had breakfast at the cafe right next to the hostel, Cafeteria la Pepa. I loved this place and I ended up staying there for hours. I asked for a cappuccino and a tostada with tomato and jamon, and love it so much I may have asked the same thing twice.

There are two options connecting Toledo and Madrid, the train and the bus. Since I had arrived by train, I wanted to try the bus this time. Both options are amazing and it really all depends on your budget and the time you are willing to spend on your travel day. While the train costs 13€ and takes around 35 minutes to connect both cities, the bus costs half the price, around 6€, but it takes 1h to 1h30. Even though I love trains, I found the bus to be very convenient and cheap and if you are on a tight budget for your trip and want to save a few euros, than I would say the bus is the best option. On the other hand, if you want to stay closer to the city center, than the train might be your best option as it takes you straight to Atocha train station, while the bus leaves you a bit further away at Plaza Eliptica – where you can always get the metro to get to where you need to be.

Overall Toledo was a great experience and a perfect place to adapt to traveling alone again before moving on to the big city of Madrid. I really advise you to give a chance to Toledo if you’re ever traveling Madrid. If you don’t want to stay for the night, you can easily do it as a day trip and get away from the chaos of the big city for the day.

For my two nights in Toledo, Spain, I chose to stay at Oasis Backpackers Hostel, right in the heart of Toledo. The location couldn’t be better and it’s very affordable, with prices around 20€ for the night in shared dorms.

HOW TO GET TO TOLEDO

Getting to Toledo via Madrid is extremely easy. Here’s how to do it: 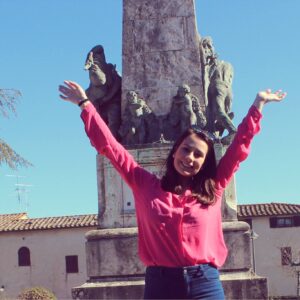 One week Tuscany Itinerary on a budget | Italy