You are here: Home / Europe / Three days in Granada | Spain

As usual I was lost and had to ask for directions to the city center. My map was showing me I was way too far from the center to walk. Bad news I had to catch two buses to get there. Good news, it was cheap and didn’t take that long anyway.

Now, I’m the kind of traveler who does not just pay 15€ to go on any tour. I save my money when I travel as much as I possibly can, and I have to say no to a lot of things in order to travel to more places. But, when a lady at the information point tells you about this incredible night adventure tour, that is suppose to be one of the best tours in Europe, and that I can’t leave without doing it, it got me thinking.

As I’m terrible under pressure, it didn’t take me five minutes to say yes and buy the ticket. Suddenly I was on the bus to the center calling my boyfriend to tell him I was going on a night adventure tour in the woods and I was going into some caves. He thought I had lost my mind.

One morning I woke up and saw my included breakfast was about to end. I had fallen asleep but I was not about to miss a free breakfast. I ran down the stairs still in my pajama. As I got to the reception I fell on the floor slightly twisting my ankle.

Being used to twisting my ankle every six months or so, I was not going to sit by the hostel and ruin my time in Granada. I walked all the way to Granada Play’s office, explained the situation and asked to take the tour the next day. After that it was exploring time.

It took me a while to see the beauty in Granada. Everyone had told me the city was beautiful, but I was not being wowed by it at first. Where were the cute narrow streets I always love? Were where all those places I had seen in photos that looked nothing like what I was seeing?

I was wandering around with no purpose in the city, when I decided to improvise and get lost. Following the streets that would call for my attention, I ended up finding just what I was looking for. I was finally seeing the colors that made me happy, the daily life of the locals and a sweet escape from the most popular places in Granada. I realized if I wanted to enjoy the city, I would have to get lost and see it as an adventure.

As I got further from the hostel I felt I was starting to get to the heart of the city. I went up some stairs up an alley and I found myself in what would become my favorite part of the city, the Albaicin neighborhood. Trust me when I say that if you happen to be visiting Granada, you cannot leave without getting lost in this part of the city.

My last day in Granada was by far the best one. I was feeling better from my ankle, so no more excuses to walk less, so I stormed out of the hostel to explore every last bit of this amazing city.

Before leaving I wanted to experience some good typical food, so after a lot of research, and discovering that most restaurants in Granada are pretty expensive for a tight budget like mine, I stopped at a restaurant, sat on a little table outside and asked for the daily menu.

Many restaurants in Granada offer lunch menus at cheaper rates, but if you want an advise, don’t buy it, unless you are the kind of person who eats a lot – I mean, a lot! – An amazing thing that took me too long to discover is that most bars and restaurants offer you a free tapa every time you buy a drink, alcoholic or not.

By the time food started to appear on my table I realized I had made a mistake. Not because the food wasn’t good, but every time a new plate came it was big enough for three of me to eat. Which means by the second course I was already feeling full for the rest of the day, but I was paying for the hole thing, so I had to force the food to go into my belly or the money spent wouldn’t be worth it.

Leaving the restaurant I got lazy, felling like I was rolling up and down the streets instead of walking. Who eats that much? I mean, I have been a girl who eats well and big portions since I can remember, but I’m pretty sure I ate what could have fead three people with all of them feeling full after.

After an amazing day, I went back to the hostel and prepared for one of the craziest things I was about to do ever since I started traveling. I am not an adventurous person, at all. I’m ashamed to same I’m pretty lazy and I get scared for the smallest things, and to tell the truth, I’m not a night person either. What have I gotten myself into? Was I seriously about to walk in the woods with only a flashlight on my forehead, entering underground caves and passing my an illegal neighborhood where the ray of light I got was from the moon?

When I got to meet my guide, Silvia (who by the way is amazing and I couldn’t recommend her more to lead this tour), and the other travelers who would be my partners in this scary, yet amazing experience, I relaxed a little bit. It was not a group of athletic adventurous people, just regular travelers looking for a different experience of Granada, just like me.

I wrote a post about this Night Adventure Tour with Play Granada, last year, but this is basically, in a resumed way, what happened. The tour starts slow and with a lot of talking and history background on several spots around the city as you start walking your way up the most incredible viewpoints I’ve ever seen, where sunset photos are a must. And if you are lucky like I was, you will not be disappointed and all the crazy hill you have to go up to will be worth it.

As the sun goes down and the sky turns pitch black, it will be time to get that flashlight on your forehead and you are about to discover why it is called an adventure tour. Suddenly walking gets pretty hard, as the path is full of holes, rocks and dirt, and I am not exaggerating when I say you really can only see half a meter ahead of you, so careful where you put your feet! By this time I was already shacking and getting mad at me for doing this. When the guide told me there was a girl who had fallen there and broke her leg, I was sure I was in trouble. If someone was going down, that person was me!

Almost died going down after the amount of times I was sure I was going to fall and break something, but with the help from other people on the tour, I made my way down safe.

After the illegal gypsie neighborhood you will have some time to relax, but don’t think you already survived, as you still have the scariest part of the tour to do and lets just sayyou will walk in the woods in the dark. Woods where girls were kidnapped (and the criminal was never caught), if you are not extremely careful you will fall down a giant waterfall and die, there will be young groups screaming to scare you, and then you will have to get down this hole on the ground.

You are not forced to go inside the hole on the ground, but lets face it, the other option will be staying out in the pitch black woods, alone, where girls were kidnapped, so maybe you should just go in. I know I did!If you can manage to do all this and make your way down the woods, you will have a story very close to mine to tell.

All together and alive back to the office, we got some tips on two tapas places, and having a couple on their honeymoon saying they were going out for some food, me and a Korean guy decided to join them. We asked for a giant plate with different tapas, got our tummies full, shared stories, laughed, tried to pull off some very bad Spanish, and finally said our goodbyes to each other and to the city.

My three days in Granada were amazing. This city, that didn’t charm me at first sight, quickly turned into one of my favorite cities. Doing the Night Adventure tour, for sure, had a lot to do with this. It was the first time I paid for a tour and it made me want to do other tours in the future. I met amazing people and made life long memories in a city that I eager to return ever since.

How to reach Granada

The easiest and cheapest way to reach the city is by ALSA bus, if you are already in Spain. You have buses from Madrid, Cordoba, Seville, Malaga and many other cities for fares between 10€ and 20€. 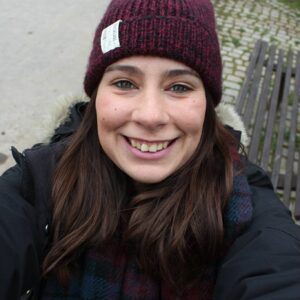