I can’t even put into words how I feel in love with Bratislava. It was a city I had no expectations. I went there because it was cheaper to go there than to go to Vienna from Budapest. It was a city that scared me, as most people would cut it out of their itineraries, but knowing I had the courage to go felt amazing, and exploring the Old Town was kind of like magic.

I left Budapest pretty late, which got me to arrive in Bratislava way later than I pretended. Well, shit happens, and sometimes you prefer to loose a train and keep talking to a Canadian guy you just met, just because he was the first person to make you feel like your journey is worth it and it matters, and when you’re feeling alone and lost, there’s nothing more important than that: support!

Having only an afternoon, I had to be quick so I could enjoy the city, right? Oh, boy….I got lost! I decided to take the map open on my laptop, which decided to die when I most needed it. So I arrived in Bratislava, ate a 0,70€ hot-dog (yes, really!) and I was lost, not knowing where to go or even the name of my hostel. I wandered for two hours, pretty scared and confused, and already mad to have only one day booked there.

Eventually I found the place, changed clothes,took the smallest map ever, and I explored the Old Town. OH MY GOD! Is this real? Every little street was prettier than the next, the colours, the lack of people (meaning not many tourists around with selfie-sticks) and the hability to walk without being bothered. Then I decided to cook, and for that I went to the supermarket, where I discovered that buying cream, to make carbonara, is the most difficult thing in Bratislava…they don’t have cream!! Still, I burned  my dinner at the hostel, so I guess no cream was just fine.

I left the next morning, sad for such little time in the city, and with a promise that I would be back soon!

God, was I happy to be back! I was going back to Vienna, so I was sure that I wanted to return for two more days in this city that had an Old Town that made me fall in love, no matter how small the city actually is.

And then, fate decided that my trip needed a little more of “meeting people”, and on my first night back to Bratislava, I was in my room taking a nap when out of the blue two guys and a girl came in the room making a hell lot of noise, and they started speaking in Portuguese. Who knew? Four Portuguese in the same room as far from home as that! We started talking in a second and they were my Bratislava buddies for the next two days. From climbing up to the castle, trying typical Slovakian food to drinking beer at night, I explored Bratislava with them and having been there already, I even played a little tour guide!

I didn’t know this by then, but one of those Portuguese people would welcome to her house in Warsaw and , we would travel together to the Baltic countries! Isn’t life pretty amazing? And if four portuguese people meeting randomly in Slovakia wasn’t enough, there was also a Brazilian guy in our hostel! So, yes, FIVE portuguese speakers in Slovakia, all in the same hostel! What are the odds?

These people totally transformed the rest of my trip to about a million times better, and I’m seriously grateful to them!

A day in Bratislava | Slovakia

A short story from Bratislava | Slovakia 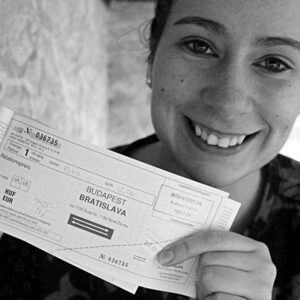