Joining a night adventure tour in Granada was not in my plans. In fact, I had zero intentions of joining any kind of tour due to my very tight budget. Still, a few minutes converstation at the bus station of Granada changed everything.

I arrived in Granada feeling totally lost. I checked my GPS and found that the city center was pretty far away. I walked to an information point, got major help from the lady there who thank God spoke English, and she says I have to catch two other buses (after having done a 5h drive from Madrid). She’s amazed by my English without any Portuguese accent, and she asks if she can give me some tips on what to do in Granada.

She then starts showing me stuff about a tour that I can do, showing me photos of people walking in the woods at night and entering caves! I’m not an adventurous person myself. My regular adventure is getting lost and trying to find my way back.

But for some reason she totally sells me the idea, as I start believing it’s time I do something different in my travels, something that totally tests my poor body skills and so, even not knowing what I was getting myself into, I said HELL YES in excitement and I was in for the craziest night of my life!

I was going to take the tour on my second night in the city, but any guesses of what happened? I woke up late that day, having to jump out of bed andrunning to the free breakfast, which turned out to be too much for my clumbsy body and as I got to the reception I fell down on the floor and twisted my ankle!

So I had to change my Granada night adventure tour for my last night, and boy was that the best decision I ever made! My tour guide, Silvia, was amazing and my group even more, and I’m just happy I had this experience with them and not others.

The tour started just like any other normal tour, with all that blabla, stopping every couple of minutes to get some historic background of the places we were standing. Even being just a regular tour at first, I was already finding hard to be able to control my breath. We kept going up and up and everytime we stopped I took the liberty to try to breath normally again. I didn’t want to look like a grandma in the process, I wanted to look like I can at least climb a couple of stairs without feeling like I couldn’t breath.

By the time the sun started to set, that was when thigs got hard. Suddenly there were less stops for chit-chat and a lot more getting over those hills, and I started feeling it. Lucky for me I had a pretty amazing group, who wouldn’t leave anyone behind, and a great tour guide who kept asking if us grandmas were ok.

When we got to the top hill of Sacramonte I was hooked! I actually couldn’t breath and I sat as soon as I reached the top, but the view? Oh my God that view! The skye turned pink as we could see the view over the city and the famous Alhambra, and I couldn’t believe my eyes. That moment was worth any hill climbing, and I started to feel so proud for taking that tour. I even made the mistake to say “I think this tour is called “adventure” beucase we have to go up so many hills” oh oh, big, big mistake Rita! Just wait for it!

After catching our breaths and delighting ourselves over what was my best view of a sunset EVER, our guide said it was dark and time to get those flashlights on our heads so we could keep adventuring.Me super excited to have a flashlight attached to my head. For some reason it made me feel very adventurous!

Look at this sunset and tell me it’s not worth every pain of climbing a never-ending hill! For me it was everything, and the moment I really got to appreciate the fact that I decided to take a crazy tour on my own which would make me leave the city of Granada all head over heels for it!

My super excitement was killed in a second, by the time we started walking the Sacramonte’s ilegal gypsy homes while it was pitch black! I couldn’t see a damn thing and the path was sketchy and I kept saying “I’m going to die over here” as everyone seemed to be able to get down the hill without too much effort, and I was trying way too hard not to break any bones up there. I even asked the guide what would happen if someone got hurt there, and she said that the person would have to get down the hill with the help of the others, like a girl who broke her leg there and took her three hours to get down.Well, that makes me feel better…not!

With the help of the group, specially one of the guys who kept checking if I was still behind him, and helping me everytime the path got too hard to get down from and I had the risk of falling, he was there asking me if I needed a hand, I made it down safe.

By the time we reached street light again, we were in the legal homes of Sacramonte and I was happier than ever for that damn dark hill to be over and I was still hanging on with all my bones intact.

And when I  was able to think I might just survive this night adventure tour thing, the tour guide stopped in the middle of another dark place, said it was time to get our flashlights back on, and she finished by saying:

“and we need to be careful here, keep together. Some time ago this was the place where women were kidnapped and murdered, and the man who did it was never caught.”

Me: WHAT? Why would you say that?

Guide: I had to say something cool!

Me: Ok I’m going to the middle. In films something always happens to the person who stays behind!

Me: Well…going to the middle now!

The climb was seriously hard, field with small rocks, trees, holes and even some gigantic waterfall next to the path we were walking, so I got to walk the entire time believing if I fell to the side I would die. And then we arrived. The tour guide says “We are here! And now we are getting inside that!” and points to a hole on the ground (the one on the photo above).

Me: Oh my God! I’m going to die tonight!

Guide: You’re not going to die. If you die I die first! You don’t have to get in if you don’t want to.

Me: You just said there were girls killed here. I’m not staying out here alone!

I’m pretty sure I kick ass at the drama queen thing! I’m sorry, but I get scared really, really easily.

Yes, I entered an underground cave! It seems these paths we walked, or crawled into, served asescape tunnels from the Alhambra to the outside during war times. There was even a pig that disappeared close to the tunnels and was later found inside the Alhambra!

We eventually had to go down, and I can assure you it’s scarier to go down than to climb! My feet kept slipping, I had no safe place to walk and I was scared to fall down, but again, amazing people in my group and the guide kept helping me get to the ground safe.

By the time it was over, I kept telling myself “I can’t believe I just did that!!”. To this day, I can’t believe I did this night adventure tour in Granada. But I am so, so happy I did it and I would do it again.

If you’re ever in Granada, this is THE tour you have to take. It costs 25€, but if you buy in advance at the bus station (or their website), you only pay 15€ for 3h of guaranteed fun, adventure, pushing your limits and overcoming fears.

You’ll get to walk the Albayzin neighborhood of Granada, see some places you actually can’t miss during your visit to the city, but ones that are hard to get to if you’re not familiar with the place.

You’ll get to see an amazing sunset from the top of the Sacramonte’s hill, you’ll get down, in pitch black super scary way, along the ilegal gypsy caves. Get to pass by the best places to watch Flamenco in the city (and the good one! Not the touristic, super crowded!).

You’ll walk in the middle of the woods, get inside underground tunnels, and you’ll meet great people that will help you on your way, and with whom you might end the night eating tapas with.

This Night Adventure Tour in Granada is by far the best tour you can take in the city. I might even risk saying is one of the best tours in Spain, as there is nothing like it. Don’t miss the chance to have an unforgettable night that will push you to your limit. 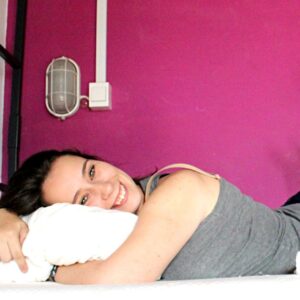