You are here: Home / Europe / 17h from Lisbon to Toledo, Spain

Getting to Toledo took me as long as 17h, and I can assure anyone that all the hours, all the minutes were insane and a mix of feelings I hadn’t felt in six months. You see, last time I traveled I planned everything for months, I was the crazy girl writing itineraries and making budgets every single day on my notebook.

People thought I was crazy, but I turned out to be right and I had the most amazing trip without having to plan almost anything while travelling. But this time? Well, this time I quit my job last minute, decided I was going to Spain, and told my parents the news the night before!

The night before I cried. This wasn’t right. In fact, everything was totally wrong! I was able to piss my friends for being irresponsible and not that great of a friend the days before, I lost my phone (AGAIN!), my mother was so angry about knowing I was going to Spain that I thought she might kick me out of the house, and I was feeling scared (for not planning anything) and sad to say goodbye to my boyfriend.

So the day I was suppose to get my train, I packed still unsure I was gonna be able to hop on that train. I felt things were out of place, and that maybe I was doing this wrong. Why did I had to go to Spain now? Why couldn’t I wait? Why Spain and not anywhere else? I mean…on my mental list I had about twenty countries that I was more interested in exploring than Spain which is so close to home.

A sad and difficult goodbye, followed by a ten hour night train journey, I wake up hearing a man yelling all over the train “Twenty minutes to Madrid!!”. I rush excited, I’m ready for you Spain!

I hop off the train like I know exactly what I’m doing, which I totally don’t, but I just follow my gut and everything turns ok in the end. I get my ticket from Madrid Chamartin to Atocha, ask for directions on how to get the train and I’m at the right station to get my train to Toledo.

As I arrive in Atocha and go to the ticket machines, I discover there are no seats available to Toledo for the next 3h. Really?? Well, off to get a coffe in a place with wifi, which by the way cost me as much as 1,8€! Seriously, a coffee for all that? Every time I leave Portugal to travel in Europe I realize how lucky I am to live in a country where you can just get great coffee for as little as 0,6€!

As I saw the sign saying “Toledo” I smile and said to myself “I MADE IT. I’M FINALLY HERE!!” Not so fast…the city center, aka, my hostel location, was 2km away from the station. So, refusing to pay 2,5€ for a bus, I walked all the way there carrying my ridiculously heavy backpacks.

By the time I arrived at my hostel I was exhausted. After not travelling for 6 months, taking 17h to arrive to my destination right on the first day totally kicked my butt, but you know what? I MADE IT! 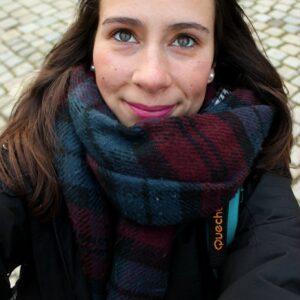