You are here: Home / Europe / Day trip from Perugia to Assisi | Italy

When my train from Perugia arrived in Assisi for my day trip, I was already happy about how my day was going. I had this good feeling that things were getting easier ever since my arrival in Umbria. The day was nothing more than full of surprises.

I got a public bus ticket from the train station to the town and by the time I looked around I felt like a kid in Wonderland. I was expecting Assisi to be beautiful, but there were so many narrow colorful streets for me to follow that I couldn’t decide on one. So, I decided to walk all of them. Problem solved!

Italy gives me all the feelings. Don’t ask me why, but ever since I started to dream I was going to travel, the country that popped my mind would always be Italy. After spending an entire month exploring the country, Italy has exceeded all my expectations, and no matter where I go, I will always return here over and over again.

The spectacular thing about Assisi is how quiet it feels as you get lost on your way to Basilica of Saint Francis of Assisi. There were even real nuns and priests peacefully walking around. The couple of hours I spent in here, I always had time to enjoy the moment and love having the streets all to myself. I mean, wouldn’t you?

When I got to the Basilica I admired it for its beauty, but everything around it seemed to appeal me more than the Basilica itself. This is what most people come to see when visiting Assisi. Still, what I saw was a Basilica on the edge of an Italian landscape, the peace all around me, the beautiful day, the tiny houses built with rocks and all the medieval aspects of the town. Why isn’t this place packed with tourists?

Once again, lack of research bit me in the ass. The bus had left me on the top of the hill, and to reach the Basilica I had to go all the way down, which meant walking up the hill again. Now, I realized it didn’t sound like a very normal thing to do, but not having a map or any other possible idea, I did it.

You can imagine my surprise once I was on the bus and it stopped at the bottom of the hill, close to the Basilica, before going to the train station. I had walked up all that hill for nothing. All I had to do was go a little further down and the bus stop would be there waiting for me to rest my legs, but no, I had to do it the hardest way obviously.

Assisi was a short visit but it got to my heart at first sight. Umbria was just what I needed during my first week traveling solo. I was having a rough couple of days and it was the moment I arrived in this incredible region of Italy that I realized how lucky I was to be there, and most importantly I was there!

Assisi was a good surprise, not counting the guy at the station’s cafe, who was very rood and shouted to me in Italian when all I asked was a ticket for the bus.

Fortunately, my day didn’t end in Assisi, as I decided to take the next town too. Spello was very different, and I admit I was more enchanted by Assisi, but it was a perfect little town too. If you want to know more about it, just read my post on Exploring Spello.

How to do a day trip from Perugia to Assisi

Perugia to Assisi: To reach the train station, catch the minimetro (1€). Buy your train ticket to Spello for 3,25€. The ticket is for a regional train, being valid for 6h after validation, so if you want to visit Assisi and Spello, catch the train and make a first stop in Assisi.

You have 6h to reach Spello so you don’t have to worry. At Assisi’s train station, go inside the cafe and buy the bus ticket to the town, costing you 1,5€ one way. The ticket back from Spello will cost you another 3,25€. This way you are saving money and exploring two new places in one day! 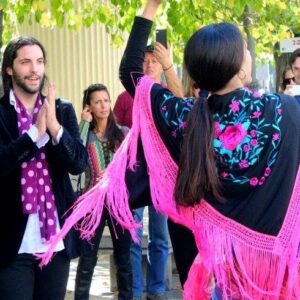