You are here: Home / Europe / A weekend in Cordoba | Spain

Oh, Cordoba, I wish I had known that you were not going to be a love at first sight kind of city. But you were competing with a powerful love for Granada, and expectations were high, and you just weren’t the right fit at the time I visited.

If there’s one thing that I hate is travelling during the weekend to a new place. Unfortunately I had forgotten about this detail, and I arrived in Cordoba at lunch time on a Saturday. Such a mistake! If Cordoba was a big city, it would be easier, it would be ok, but instead I arrived in a small city of Andalucia, and EVERYBODY was in the streets! And when Spanish people are in groups, prepare for a lot of yelling, loud laughing and craziness.

As soon as I set foot out of the bus I got this weird feeling in my stomach. I don’t know what was wrong in the station that day, but I didn’t feel safe and all I thought was “I just need to get to the city center and I’ll be ok”. I don’t usually get all scared as I arrive in a new city, but the truth is sometimes I get spooked for no reason, and Cordoba’s bus station gave me a weird vibe.

Suddenly I was walking the station, asking for coffee and some food, and everyone I came across would look at me in a very strange way. I didn’t feel that curious look of “oh, there’s a tiny young girl alone with her two very heavy backpacks”. That day I saw no security, I had no idea how to get to the center, and I was scared. Still, I should say the waitress at the bus station was very sweet and he even draw on a piece of paper the directions on how to get the bus to the city center.

My hostel was pretty central, but in a small narrow street kind of hidden that took me a long time to find. I kept going up and down the same street, pretty sure it was there, but always missing the right place, so people probably thought I was crazy for walking pass them a million times with an exhasted face and sweaty look as I carried my backpacks with me the entire time. I really need to learn how to pack less crap, because two heavy backpacks are no fun to be lost with.

I had booked two  nights in Cordoba, and after arriving at my hostel pretty tired and still with no clue what to do in the city, and basically being a lazy traveller, I stayed in my hostel planning the next day. I felt excited to see the patios field with colorful flowers, the narrow pretty streets all over the city, the famous Mezquita, the place where you could buy cookies made by real nuns, the Roman bridge, and the food.

My hostel was amazing, central, comfortable, great wifi, a typical Cordoban building with a patio and really nice receptionists. The thing is, it was around 1am and there were KIDS in the hostel. When I say kids, I mean about FIFTY kids, singing and screaming and being annoying and I saw the entiresituation as disrespectful, because neither the receptionists nor the adults they were with said a word about the noise. They just decided it was awesome to let fifty kids scream and make one hell of a mess, bothering all the guests in the hostel and not letting anyone sleep.

I woke up the next morning with those same kids screaming. I look at the clock that showed it was 7am. I left the room in my pyjamas with a very angry face, only to see the adults incentivizing the kids to sing and scream louder. When they left, that hostel felt like heaven on earth and I couldn’t be happier for the silence.

I got out into the streets, ready to explore Cordoba and decided to find my love for the city. Being really early there wasn’t a lot of people outside yet, so I got to enjoy a little of getting lost and take some photos without tourists getting in my way.

Instead of spending my money entering main sights in Cordoba, I decided I would try local food and I was happy with my choice, as I love food and I don’t really have the patience to see sights where all the tourists are, which means I would be paying to see something and not really be able to enjoy it because I have a thousand other people in the same place, doing the same thing.

I found a place called “Taberna El Potro” in a cute square and decided that would be it! I wish I had seen that the prices shown didn’t have the IVA tax included, so ended up spending more than I was hopping, but the food was great and the waitress was really helpful telling me what I should try that was 100% Cordoban food.

I started with Salmorejo wich is a tomato based kind of soup, served cold, with cheese and bacon, and tastes AMAZING! Way better than Gaspacho if you ask me. Than I went for another specialty,Croquetas caseras, with a yummy filling and that got my stomach pretty full and happy. I ended with the one I was searching for, the famous Rabo de Toro, which translated is Cow’s Ass. I know, not very appealing, but it was one of the best meat dishes I tasted in Spain, and one you can’t miss! I tried all these in tapas mode. You had the option to order them as big meals, but it would be expensive, and my stomach wouldn’t be able to take so much food.

I paid a total of 12€, being the Salmorejo and the Croquetas Caseras 3€ each, the Rabo de Toro 4€, and the drink (that is always the most expensive thing in Spain I believe) that cost me 2€.

The morning I had to catch the bus to Seville, I woke up at 7h30, because there’s one amazing thing that you can’t miss while you’re in Cordoba, The Mezquita, which is free to visit from Monday to Saturday, from 8h30 to 9h30. This place was a little like magic and was worth the early wake-up call. At that hour it was almost free of people, and I had the place almost all to myself, and I got to save 10€, the cost of regular entrance to the sight.

I wish my weekend in Cordoba would have been different, because even having loved the typical food, the nice and helpful people, and getting to the Mezquita, a place I’d been hearing for the longest time, I still didn’t click with the city and that makes me a little sad. I know I can’t love all the places that I visit, but when I only have two weeks to spend before having to go back to a sucky job, I expect that all the places that I choose are as amazing as I dreamed them to be. 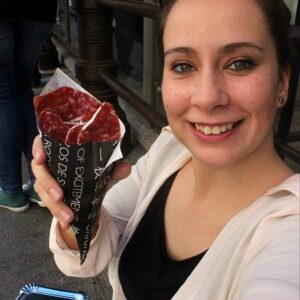