Viena, Austria was not in my plans. I had visited this city back in 2015 when I was solo backpacking Europe for the first time, and I never really planned to return as it wasn’t one of my favorite places on earth.

As I planned my trip to Athens, Greece, to attend a friend’s wedding, finding cheap flights one month before wasn’t an easy task. The direct flights between London and Athens were extremely expensive and couldn’t afford them. Missing out on the wedding wasn’t a choice, so I spent hours in front of the computer. Using skyscanner and their option to choose the destination as ‘everywhere’ allowed me to find cheaper options and that’s how Vienna ended up in my plans.  Instead of returning straight away to London,  I decided to spend a night in Vienna and with that my tickets went from 400€ to 150€.

After an amazing three days in Athens, watching a friend get married and being the happiest girl on earth for having the chance to be a part of it, I said goodbye to my friends and to Greece and I was on my way to Austria once again.

Turns out I didn’t really plan things the best way. I booked the flight to Vienna in the early morning after the wedding, completely forgetting that weddings usually go until very late. I ended up not sleeping before my flight and it was a very painful travel day.

We left the wedding at four in the morning and had to be at the airport at six. So, me and my friend just had time to head back to the hotel, totally destroyed, pack our bags and get a taxi to the airport. As her flight was earlier than mine, we said our goodbyes and I still had a lot of time to kill before my flight. I walked around the airport just trying to stay awake which was a really hard task as all I wanted was a bed to sleep. Once the plane arrived I found out it was the first flight ever between Athens and Vienna for Laudamotion and everyone was offered a little cake as a gift.

I arrived in Vienna feeling like a zombie and a part of me wished I had just landed in London instead so  I could go to my bed in the hotel. Instead, I had to drag myself through Vienna’s airport, eat at Mc donalds because I was running low on money after I spent almost everything I had in Greece. I found my bus to the city center, the cheapest way to get there from the airport, and I was finally on my way to a bed to get some much needed sleep.

STAYING IN A HOSTEL FOR THE FIRST TIME IN THREE YEARS

Once I arrived at my hostel I had a strange feeling. It had been three years since I was in a hostel. Being a cabin crew, I always stay in hotels – since my company is paying for the accommodation -, and I forgot how hostels are like. Entering my room I wanted to cry. The room was weird, dirty and smelled like dirty feet. Why did I do this to myself? This brought back memories from when I visited Vienna back in 2015. Back then I stayed in a different hostel but seriously as bad as this one. Still, I was exhausted and even though I was feeling uncomfortable in that room, I just wanted to sleep after around 30h of being awake. I made my bed, always looking at the matress and the sheets to make sure I didn’t see any bedbugs or other horrible things, I got in my bed and I slept until the next day.

GIVING VIENNA A SECOND CHANCE AND EXPLORING THE CITY

I woke up early ready to explore Vienna and give this city another chance after not loving it back in 2015. I decided to pay for the breakfast at the hostel since it was too cold for me to go out and try to find a place to eat. The breakfast wasn’t great – blame it on me being spoiled with lovely hotels with amazing breakfasts that my company pays for -, but it was enough to get the energy to start the day and go explore Vienna.

I got the metro to the city center. I didn’t have much time so I had to choose an area to explore as later I would have to return to the hostel to pick my bags and head to the airport to get my flight back to London.

I really wanted to see the Belvedere Palace, Schonbrunn Palace and the Naschmarkt. I didn’t see any of these. I ended up deciding to just get off the metro at the most central place possible and walk around there and see what I would find. I got out at Stephansplatz to start my few hours of exploring. You can’t get more central than this. I saw the St. Stephen’s Cathedral for the first time, bought myself the typical fridge magnets as souvenirs to take home and I walked around with no specific plan. I just knew I couldn’t go too far since I needed to watch the time in order to not miss my flight and get stuck in Vienna.

Unfortunately the weather wasn’t on my side. After summer weather in Athens, walking around with less than 10ºC was harder than I was expecting. The cold felt like needles in my skin and I couldn’t really enjoy my time left in Vienna because my body was refusing the cold. Anyone who knows me knows I’m a girl who needs her sun. My friends always think i’m overreacting when I tell them I’m freazing and sick because of the cold but the truth is anything less than 10ºC is unbearable for me. My body shuts down, I get sick and even start having constant dry blood on my nose.

After only a few hours exploring from Stephansplatz to Stadtpark, I was on the verge of tears because of the burning cold weather and I decided to end my exploring time and just give up and head back to the hostel. This was a disappointing day as I was once again in Vienna and I didn’t really get to see anything. It just wasn’t meant to be. I spent my last few hours at my hostel just editing my photos from Athens and the very few I had from Vienna.

LEAVING VIENNA & MY FEELINGS ABOUT THE CITY

By the end of the afternoon I left my hostel, got my bus to the airport and I was ready to go back to London. To be honest, this was my third time in Vienna and I feel like no matter how many chances I give to this city I always leave with the feeling it’s not for me. Maybe blame it on the weather since every time I visit it’s way too cold for me to walk around, but the truth is I never felt comfortable or happy during my time visiting Vienna. It feels like the city is too big and all I see are giant buildings and endless avenues with no color. Everything is too grey and I don’t really feel the love. It’s just about the same feeling I get in Germany, a country I’ve spent months living in and that I just can’t find a way to love.

I said goodbye to Vienna unsure If it was worth the visit. I can say by the money I saved it was perfect, but I didn’t find the charming side of Vienna and I left once again disappointed with the city. After three visits I think it’s time to stop trying to love Vienna and just adventure to places I’ve never been. 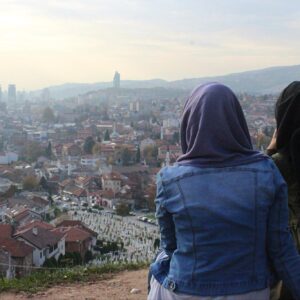